Almost 40 years since it was decommissioned, this year’s Keynsham 10k was started with the ringing of the bell on the original Fry’s Fire Service’s engine. We spoke to the current owner of the fire engine, Richard Ryan about his connection with the engine and the history of the Fry’s Fire Service.

How did you come to own the engine?

I’m the son of Des Ryan, who was the Chief Fire Officer of the Fry’s Fire Service and it was dad who originally commissioned the engine back in 1964. My Brother Stephen and myself spent many hours riding around in the engine when we were young, especially on training nights and attending the Private Works Fire Service Tournaments, which were held each year, usually around May.

The engine is a Morris 1965 FG40 3 tonne fire engine. I knew it had been sold in 1982 and who it had been sold to, but I lost track of it after that. After dad died in 2001, I started trying to track down the engine. Internet search engines weren’t as sophisticated back then, so I sent emails to fire services all over the country hoping they’d know where the engine was.

I eventually got hold of someone at a fire service preservation society in Manchester who said they might know where it was. They contacted a friend and after various emails, they found out who the owner was. I stayed in contact with the owner from 2003 to 2019 when I finally bought the engine off him. 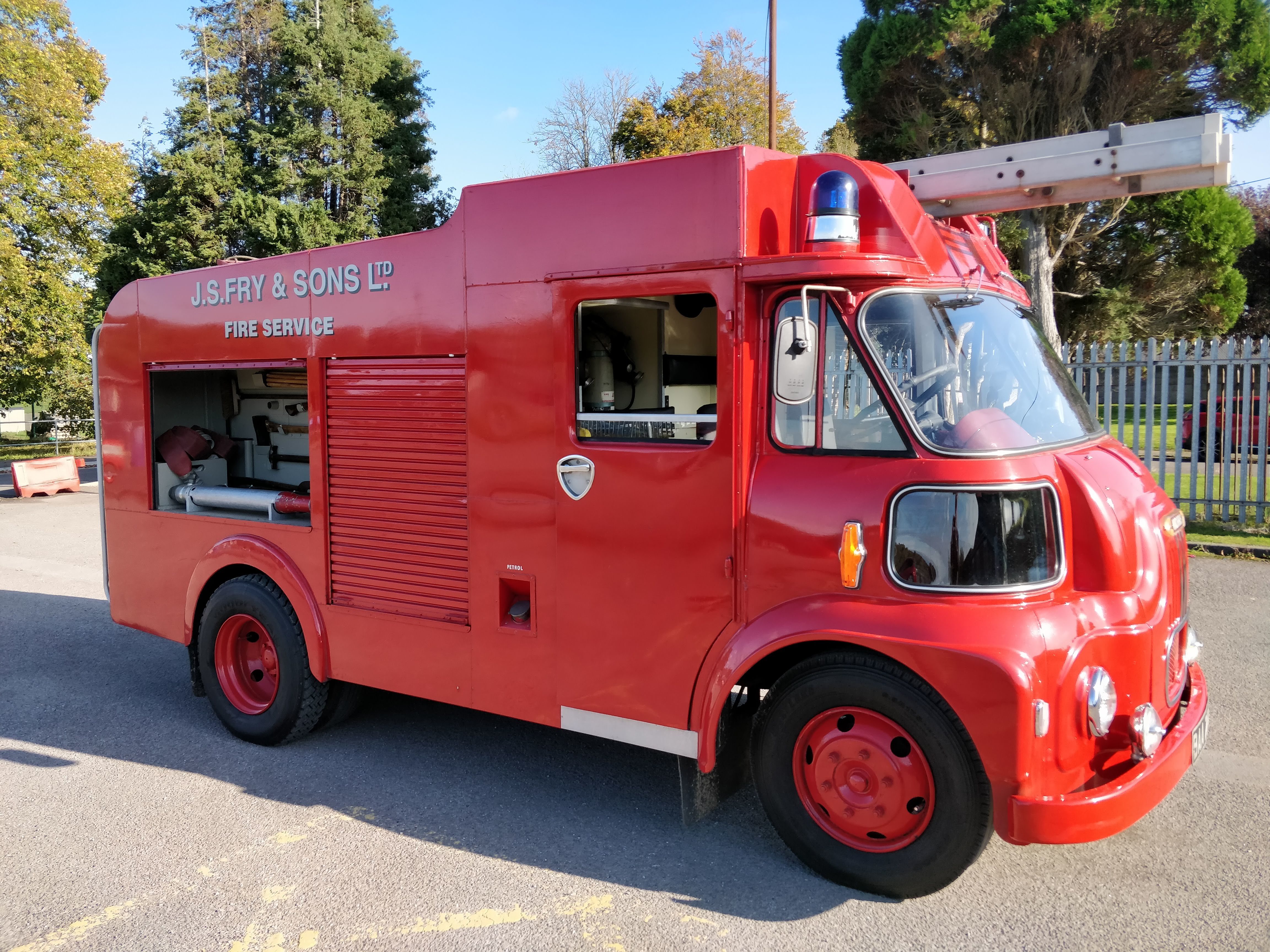 What can you tell us about the Fry’s Fire Service?

JS Fry & Sons had a works fire service from 1735 all the way through to when they moved from Union Street to the Somerdale site in the 1920s. The service was modernised after the war and again when my dad took over in 1960/61. He not only persuaded the directors of Cadbury’s to build a fire station in front of Block A, but also supply a vehicle, which at first was going to be a Land Rover. However, dad saw the Morris FG40 3T fire engine as a much better option, as it could carry six firemen plus all the equipment they needed to carry out their duties.

It was a private works fire service funded by JS Fry & Sons and later Cadbury’s. Entry into the fire service was voluntary and people who joined usually stayed there all their working life. There were sixteen regulars in the fire service who were each allocated a house in either Chandos Road, Sumerleaze or Dryleaze. All fire bells were connected to the regulars’ houses and if the incident bell rang, they would all rush to the factory.

Each house had an in/out button which was connected to a panel in the control room of number 3 lodge. That way you could tell which regulars were available and if there weren’t enough they would call in replacements from the auxiliary firemen who lived off-site. 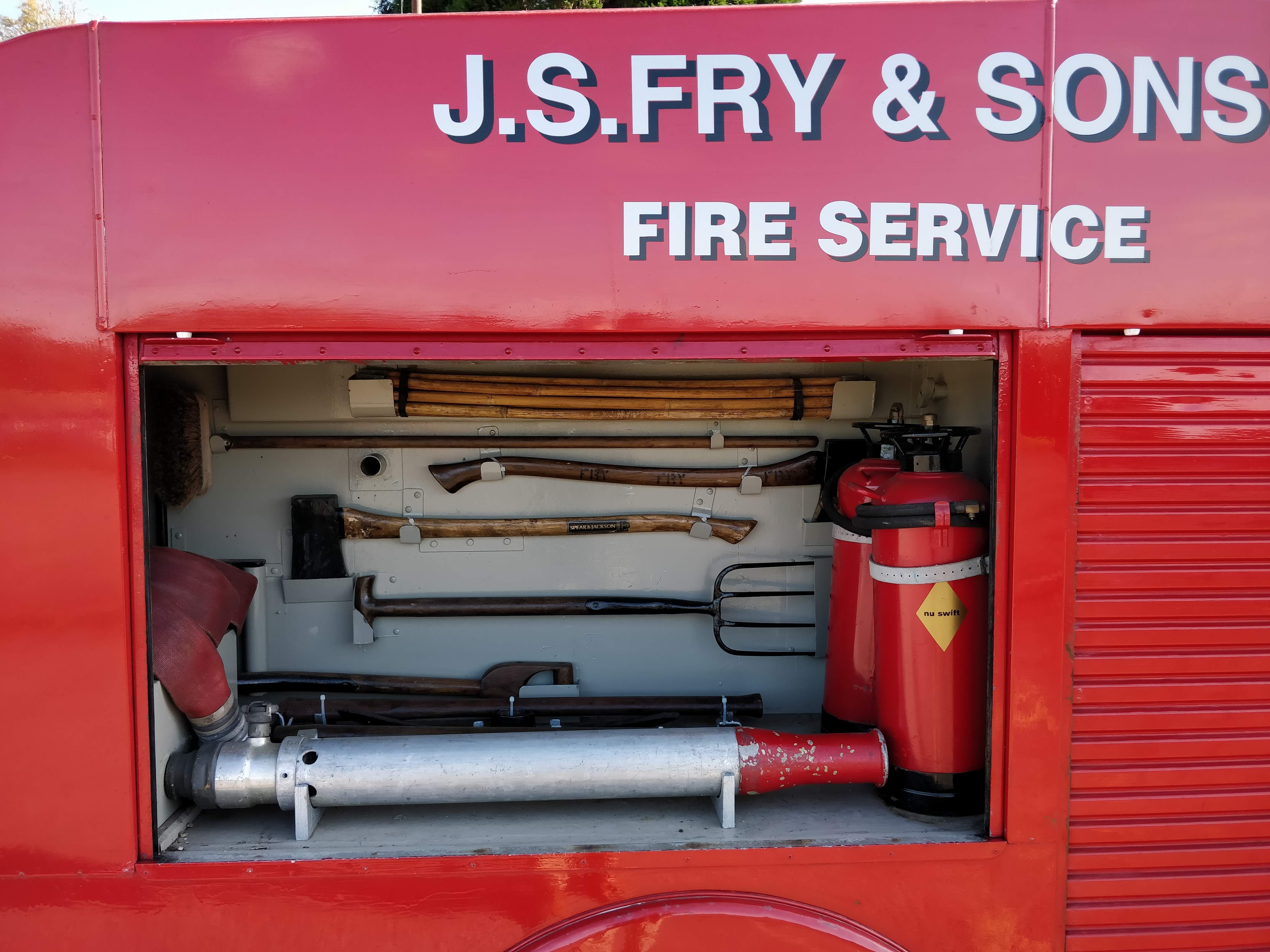 What kind of incidents did they attend?

The Fry’s Fire Service played a vital role in keeping the factory running during the flood of 1968. It started raining in the evening and just carried on. Dad set pumps up all round the factory to pump water out of the areas most at risk from flooding. The water came up to where the office block was and there was four foot of water inside the building.

The crew worked all through the night assisting both Somerset and Keynsham Fire Services. The Keynsham fire engine got stuck in 10ft of water on the other side of Bath Hill, so Somerset Fire Service asked dad to help out at Daps Hill, which was badly flooded. He sent two crews out, one of which was equipped with a canoe to ferry food and water to residents who were trapped in their homes. The County Bridge was washed away and the main bridge on Bath Hill had a sink hole in it. Dad described the flood as if someone had opened up the flood gates at Chew Valley and emptied the reservoir. He’d never seen so much rain in one day.

The Somerdale factory canteen was opened for people who were stranded in Keynsham to come and get something hot to eat and drink. People who’d been flooded in Dapps Hill and Saltford also bought their carpets in to dry in the boiler rooms. The Duke of Edinburgh visited the flooded areas around the 15 July, 1968. He landed at Frys on the top playing fields by the water tower in a Red RAF Helicopter, and the fire service provided safety support for the landing.

As well as attending incidents, the fire service were responsible for training factory staff and workers from the wider Somerdale site on fire safety. Dad was also responsible for the security staff - or ‘watchmen’ as they used to call them – and was heavily involved in the Duke of Edinburgh training, which members of the youth club took part in. 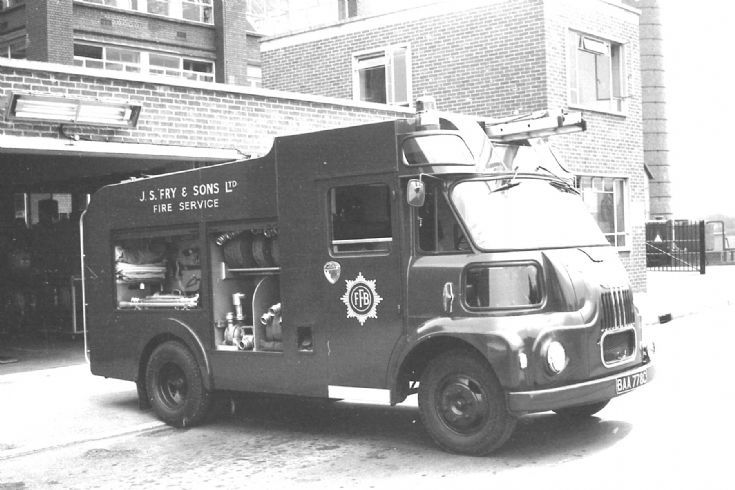 I was born in number 11 Dryleaze and lived there until I was 19 when dad retired. Somerdale was a wonderful place to grow up and there was so much freedom. The site was like a massive playground. There was always sport being played on the pitches, plus all the social activities based around the social club, like discos, shows and pantomimes. I remember one summer’s evening we were playing cricket and a glider landed in the field. Dad took him over to the factory for something to eat and phoned someone to come and pick the pilot up. 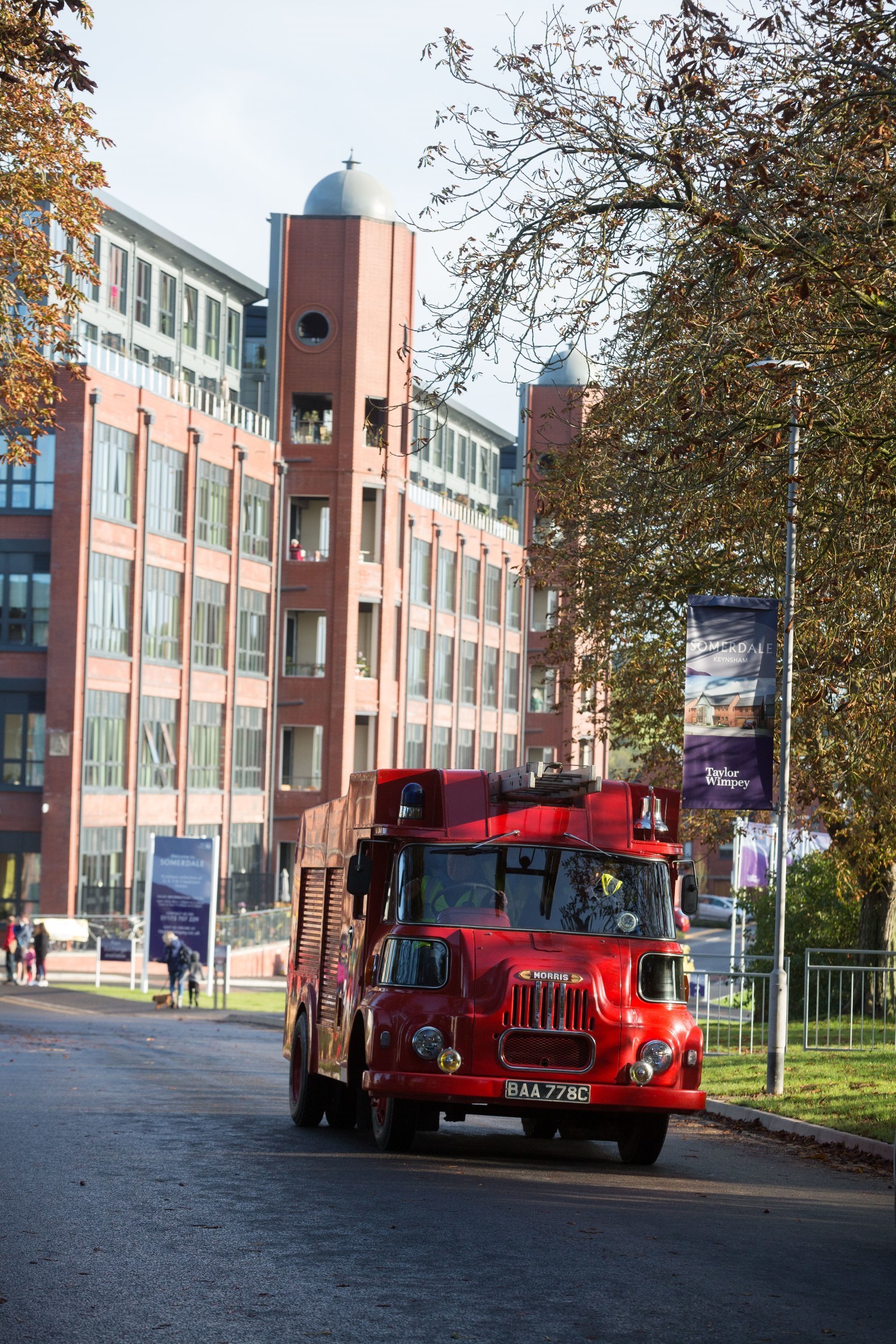 What would your dad think about the engine coming home?

I think that dad would be pleased that the engine has come home and been reunited with some of the members of his old crew and family members, especially myself and Stephen. The old crew had a great time at the Keynsham 10k, chatting to everyone and they know far more about the engine than me!

I intend to preserve the fire engine with the help of Stephen and take it to classic car shows, steam rallies and charity events. It gives people enjoyment wherever we take it and stirs plenty of memories in people.

Myself and Stephen would love to hear from anyone who can remember the Fry’s Fire Service and engine and we can be contacted via email to baa778c@gmail.com. 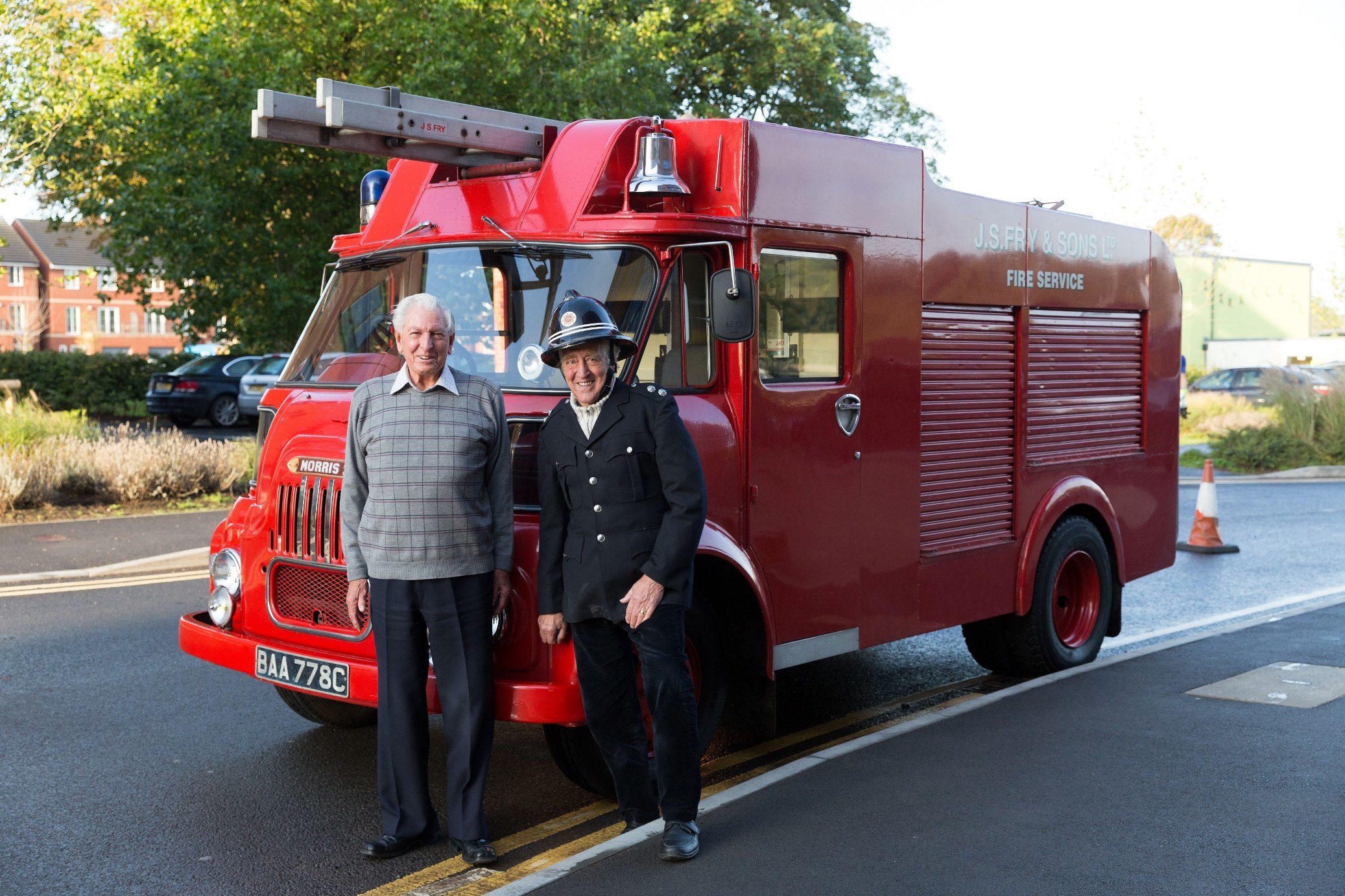 Find out more about The Chocolate Quarter

If you would like more information about The Chocolate Quarter call 0117 363 7160 or email info@thechocolatequarter.org.uk. You can also download a copy of our brochure or explore our available apartments here.